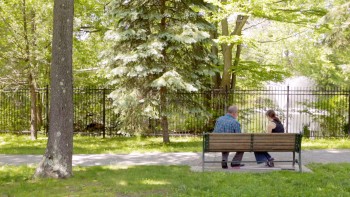 While we continue to film Michelle’s transition after Perkins, our production has also attracted the interest of some new powerhouse partners. One of the best filmmakers working in documentary today, Jeff Consiglio, has joined the team as a Producer and Editor. Jeff edited the Oscar-nominated feature film “War/Dance” (which helped inspire me to make documentaries), “Inocente” (Oscar winner, 2012), and the HBO film “Life According to Sam.” Jeff dove in completely, working along with our talented Additional Editor/Cinematographer Sarah Ginsburg.

Jeff’s involvement then led Kevin S. Bright (the Emmy-winning Executive Producer of the hit TV show “Friends”) to sign on as Executive Producer for our film. Kevin has also worked very closely with Perkins and even taught Michelle in a filmmaking class. I’m excited that Kevin invited us to screen a short clip of our film as the centerpiece video at the annual Perkins Possibilities Gala this year on May 1, where a theme will be (partly inspired by our film) what happens after their students graduate. The Gala hosted more than 500 guests and raised over a million dollars last year so we see this event as a wonderful way to make an immediate impact with our story and build awareness and support.

We are also working with Jeff Migliozzi (the Perkins English teacher featured in our film) to create an educational kit for schools and businesses so that we can expand on the vital issues that the film will touch on and do our part to demystify blindness. Jeff’s already excited about the prospect of speaking to groups. Maybe your group?!

On a personal note, I’m continually humbled that Michelle and her family are sharing an important piece of their journey with us, and I’m honored to the core for the opportunity to work with people that I admire, including Jordan, Ariana, Jeff, Kevin, and Sarah. But I gotta say it’s the love, support, and encouragement that we have received from our backers and supporters along the way that gives me the juice to plow forward with the conviction that we can be the change we want to see in the world. Together.

Yours always,
Garrett and the film team